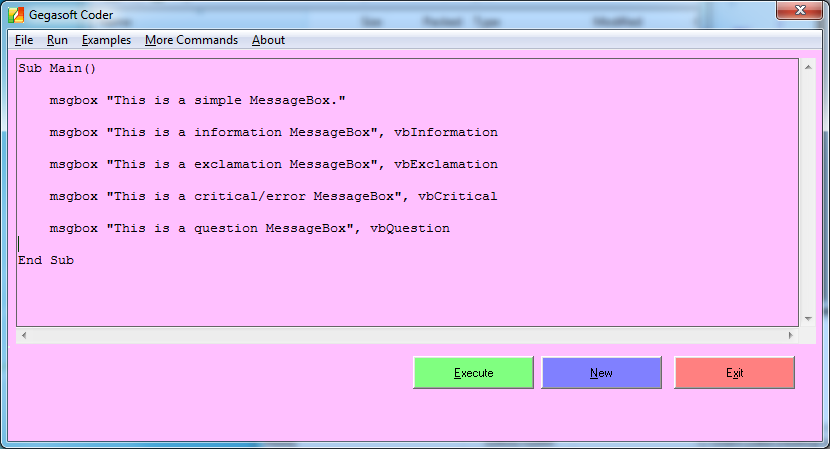 Gegasoft Coder (vb scripting language program) has been designed for visual basic programmers/developers to make short scripts to solve small windows problems. The users who have idea about vb script or vb scripts can use this program easily for making their own visual basic scripts and get advantage by executing them and solving your windows problems and much spent time works to be done in seconds.

Sometimes you want to do tasks something different and your windows does not provide functionality to do that. For example you want a list of music files 1.avi, 2.avi, 3.avi and you want to rename all the files in such a way that there names should be music01en.avi, music02en.avi, and music03en.avi. You don't find any windows command to do that work for too many files. It takes much time to do that work and you want to do all that work using any macro programming or any other software.

At that moment you just open Gegasoft Coder VB Scripting language program and write some lines of code and execute the script and then all the files you want to rename are renamed in accordance with your will instead of, opening Visual Basic, VB.NET or other higher programming language software or any Microsoft Visual Basic Application. This is small size small scripts programming language.

It supports many a functions like msgbox, inputbox, arithmetic functions, rename, delete, create files. send-keys to any program. and many more visual basic scripting functions.